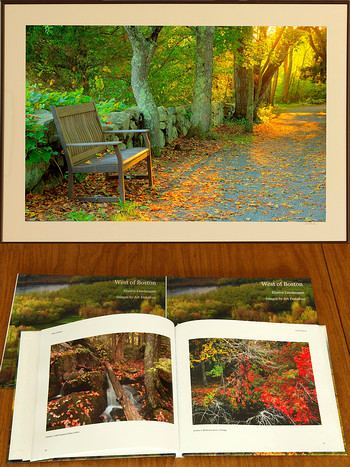 Welcome to "New England Wilds." My photography is an attempt to isolate portions of woodland landscapes and explore natural compositions and colors that exist for only brief moments during seasonal transition.

I've always had a dual interest in both the technology and aesthetics of photography. I'm fascinated by the combination of elements that work together to make a good photograph. These landscape images are "found" compositions created by nature, not by me. I'm trying to improve my "eye" for finding them and isolating the essential elements that make them aesthetically interesting. I'm also very appreciative of the efforts of generations of conservationists who have preserved wilderness areas in New England. Their work has made my work possible. My goal is to produce large format archival fine art prints and possibly a photo book, returning a portion of any profit to help preserve these special places.

Thanks for stopping by and don't forget to go outside and look around!
-Art Donahue

Biography:
Art Donahue is a native of the Berkshires in Western Massachusetts who has had a lifelong interest in the outdoors and photography. At age 12, he borrowed his grandfather's 1930s enlarger and put together a black and white darkroom. His first entry in the Kodak Teenage Movie Awards was a 1969 Super 8mm film titled " A Park"- a film about Look Park in Northampton, MA where he also worked as a 15-year-old garbage collector. Art used his dollar-an-hour wages to save $300 for a used 16mm Bolex movie camera and a chance to move into broadcast television.

Today, as a film and television producer/writer/photographer/editor for over 40 years Art Donahue has won 15 Boston/New England Emmy Awards for Producing, Production Videography, News Videography, Video Editing and Writing. During the 1970s he worked as a 16mm newsfilm cameraman and a single and double system sound film editor. Art was also a lab chemist processing Ektachrome motion picture and slide film. When television news transitioned from film to videotape, he studied electronics and received an FCC First Class Television Engineering License in 1979. He was the Boston Press Photographers Association's "New England Television News Photographer of the Year" for 7 years and the National Press Photographers Association's "National Television News Photographer of the Year" in 1986. Donahue has worked as a freelance cameraman for CBS and NBC. A documentary he produced, shot and edited on the Maine Grange won the NPPA's national "Best Documentary" award in 1992. In 1999, Art shot New England's first High Definition Television program. For the next 8 years he produced 45 HD programs as part of a research and development team field testing HDTV production equipment and editing workflows for a U.S. broadcast television group. Over the past two decades Art Donahue produced, wrote, photographed and edited 110 half-hour magazine programs for a major Boston television station. Many of the themes were New England history and nature including programs on state and national parks, national forests, hiking trails, mountains, rivers, lakes, seasons and conservation groups. In 2008, Art received the National Academy of Television Arts and Sciences Boston/New England Chapter “Silver Circle Award” for “significant contributions to television over a period of 25 years or more.”